“STARLIGHT SERENADE” is a delightfully involving historical romance with elements of mystery and suspense from author Debra E. Marvin 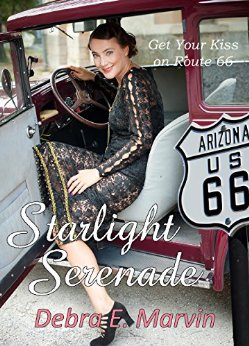 Starlight Serenade (Get Your Kiss on Route 66)

Broadway understudy Clara Longworth and her peculiar younger brother are on their way to a new life in Hollywood when they are stranded along Route 66. Clara is asked to fill in as nightclub entertainment, but her good intentions set her up as accomplice in the blackmailing of a government man who makes the real thugs look classy.

Until Julian and Clara put their heads together for more than dancing the Black Bottom, their big-as-the-night-sky dreams are on target to fail. Maybe they need a telescope to see what’s right in front of their starry eyes.

MY REVIEW:  “Starlight Serenade” is a delightfully involving historical romance with elements of mystery and suspense. Author Debra E. Marvin sets the story in Arizona of the 1930’s, and she wonderfully captures the atmosphere and energy of the time and place. After the death of her mother, Clara Longworth heads for Hollywood and hopes for stardom and a successful life for herself and her younger brother, Henry. Their journey takes a detour, however, when their bus breaks down outside Flagstaff, Arizona. They are given a lift to the hotel by none other than famed author Zane Grey, and that is just the beginning of their adventure along the new (and forever famous) Route 66. Clara is a talented dancer and singer, and Henry, while enormously gifted, doesn’t quite see life as others do—he is somewhat in a world of his own. Events occur quite quickly to make it seem as though Clara’s dreams for the future may be rerouted, just like she and Henry were diverted on their way to Hollywood. However, Fate has much in store for the Longworths, including a sweet surprise romance and a renewal of faith for Clara. Many obstacles have to be overcome on the road to happiness, and compromise may be the only answer. Danger lurks, though, and courage will be needed to in order to solve the mystery—and survive. The author does a terrific job of story building, and once I started reading, I had to keep on reading it to learn the outcome. This is a short work of fiction—a novella—but it is fully-realized. Readers are in for a real treat when they travel back to a time when the famed Route 66, also known as “The Mother Road”, was a newly-minted pathway which would link the Midwest to the West Coast. 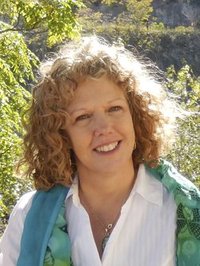 Debra E. Marvin tries not to run too far from real life but the imagination born out of being an only child has a powerful draw. Besides, the voices in her head tend to agree with all the sensible things she says. She'd like to live a wee bit closer to her grandchildren, but is thankful that God is in control, that He chooses to bless us despite ourselves and that He has a sense of humor.

Other than writing light-hearted romances and gritty gothics, she has rather normal obsessions such as fabric, peanut butter, vacations, British dramas, and whatever mystery series she's currently stuck on.

debraemarvin.com
Posted by Virginia C at 4:27 AM 2 comments: